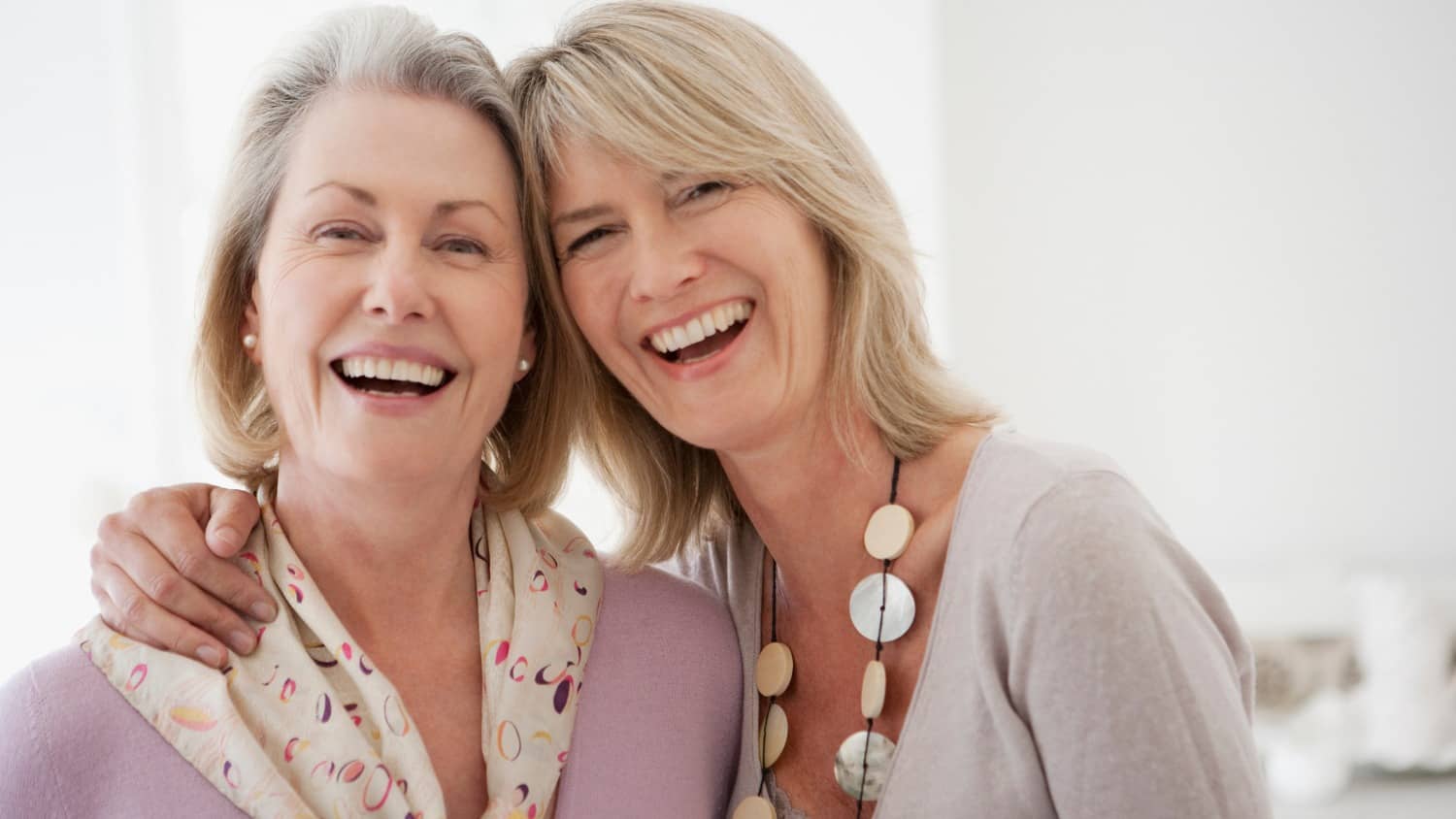 I am lucky enough to have a BFF who is gorgeous, generous, loving, and ever so much fun. She has a successful business as a healthcare provider, a speaker, and author. In my eyes, her only fault is driving a gleaming black, late model Mercedes, which I secretly refer to as a Nazi Staff Car. Although, truth be told, I am morally bankrupt enough that I would never turn down the gift of one.

So how is it that this wonderful female felt the need for a facelift? Well, a “mini facelift,” actually. I tried talking her out of it. Her face is striking, with miniscule pouches along the jaw line, and some “stuff” going on around her eyes. All normal aging kinds of “things.”

She readily admits the catalyst for the lift was a painful breakup and thus was a gift to “get ready for the summer dating season.” Once my friend (we will call her Olivia) makes up her mind, she is a force to be reckoned with. However, she agreed I could write about her experience, including some pretty raw emotional material, ranging from despair to fear, and then finally to elation.

We will start with the tough stuff. Olivia lost her alcoholic, mentally ill mother at a young age. Her father was in and out of the picture, whenever fancy struck. Passed around from relative to relative, she found that some were warm and loving, but also that some were physically and emotionally abusive. One of the most evil of all enjoyed devising punishments involving the maximum amount of public humiliation.

When he was around, Olivia’s Dad drank and had affairs. Police would sometimes bring him home after he was found driving erratically, including onto neighbors’ front lawns. This life took place against the backdrop of upscale looking homes, some with horses, barns, and gardens, and usually in sought after suburbs. As Olivia likes to say, “I was an upper middle class waif with Daddy issues.”

Fortunately, Olivia is like a mountain goat, without the beard. “I shave mine,” she likes to say. She sees herself as able to easily climb steep rocky slopes in freezing cold temperatures. Namely, she was equipped from the womb to adapt to harsh circumstances. How could anyone not love this woman?

How indeed? Olivia says, “I have one of the worst pickers in the Universe of men and women with broken pickers.” That’s how.

Despite her inner strength and accomplishments, Olivia constantly scans her “outer self” for flaws she believes have sent men packing in the past. As a friend, it’s tough seeing her do this, even though she is aware her thoughts are irrational.

But at the same time, “culture and society” overvalue youthful good lucks, so I would argue that if Olivia feels her lift will help her feel better, then she has earned that right (as well as having earned the money to pay for it – just under 20K!).

So, we drove to the outpatient clinic where the procedure would take place. On the way, she serenely told me the anesthetic would consist of Lidocaine and Epinephrine.

Lidocaine? Such as what I have in my medicine cabinet? How could she possibly agree to that?

“Well, it’s what the Doc uses, who am I to argue with her,” said Olivia.

Me! I would argue with her! I thought.

But most importantly, the underlying muscle (SMAS) is somehow pulled up and stitched together to provide the underlying support for the tightened skin. Paul Lanfranchi, DO, FAOCO, on realself.com says “By tightening the SMAS it allows for the skin to be redraped rather than pulled…”

All righty then. So first you are going to cut my skin, then cut and otherwise mess around with my muscles, and I hardly know you? One must never, ever forget the need for due diligence in choosing a surgeon.

In recent years, I have seen oodles of improperly performed facelifts, most of them seeming to be in Scottsdale, Arizona. Unfortunately, these poor women look as if someone pulled their skin back tightly at mid-ear level, stretching back not only the skin, but also edges of their mouths, creating a “Joker” like grin. If the woman also decided to heavily inject her lips, the end result is tragic.

Olivia’s procedure took about 2.5 hours (I forgot to mention she also had lower and upper eyelids done, as a cost saving measure). Double procedures get a discount, apparently.

When she emerged from the office, she was walking upright and able to casually amble to the car, which involved a quick little journey over a pedestrian bridge spanning a busy city thoroughfare. She had brought a scarf she wrapped around her head and neck, evoking Hollywood 1940s glamour. So, with her dark glasses, she looked “movie star-ish.”

“Thank God I did not die in there!” she joked.

Initially, the healing process was “not bad,” relatively speaking. Oxycodone helped. Luckily, Olivia doesn’t have addictive tendencies, although for a short period of time she was consciously overusing the Oxy’s out of sheer boredom (absolutely don’t try this at home, please).

But the drug helped her sleep her way through the first week of recovery. During this week, she slept sitting up, way overdoing the recommendations to sleep “propped up on pillows.” She lost her appetite, thus also losing her 5 pounds of Covid/Winter Weight.

But then the nightmares began. Oddly, most of them heavily featured her father. Later, Olivia said she knew the nightmares were a red flag for something, but she didn’t have the energy to face what they might mean.

Unluckily, she had developed hematoma (bleeding which had collected into a sac along her jawline), which had to be drained. This time, we drove directly to the ER. Olivia was scared. She was shaking, her blood pressure had shot up and she had a slight temperature, a scary thing during these Covid times.

Draining the hematoma sounded worse than the actual surgery. The Chief Resident took out one stitch, stuck a cannula into the side of Olivia’s face, and sucked out all the blood, which also included tiny little blood clots. Coincidently, all the care providers involved in this procedure were female.

Two acknowledged having once contemplated getting lifts when “their time came,” but seeing the hematoma nonsense, they were definitely deciding against. Olivia told them, “Are you kidding? This will be worth it!” No pain, no gain? I don’t know…

After the hematoma horror show, Olivia’ recovery started speeding up, essentially following the exact recovery course her surgeon said would occur. And, as of this writing, she looks and sounds great.

Her biggest complaints include feeling tight and numb from just over her ears to where her jawbone starts. And her skin feels so paper thin (due to how dry it got) that she fears this dry skin could easily break, with all kinds of blood gushing out.

Best of all, she has formed a committee of girlfriends who will vet all men Olivia thinks could be good mates. And not only that, we all love seeing the elation and confidence boost she is experiencing from feeling good about her outsides. Meanwhile I, along with the rest of the committee, will do all we can to remind Olivia of the beauty of her inner heart.

ADDENDUM: Would I ever get a facelift? Absolutely, as long as I could be 100% asleep during the procedure and convalesce in an expensive hotel, right next to the hospital. As a social worker and writer, it will probably only take me another 20 years to save for all this.

Have you contemplated getting a facelift? What will this procedure accomplish for you? Do you have a friend you can trust with getting you through the hard times in life? Are you such a friend yourself? How do you support your friends? Please share with the community?