Home Lifestyle Memorable Women in My Life: Evita Peron | Sixty and Me 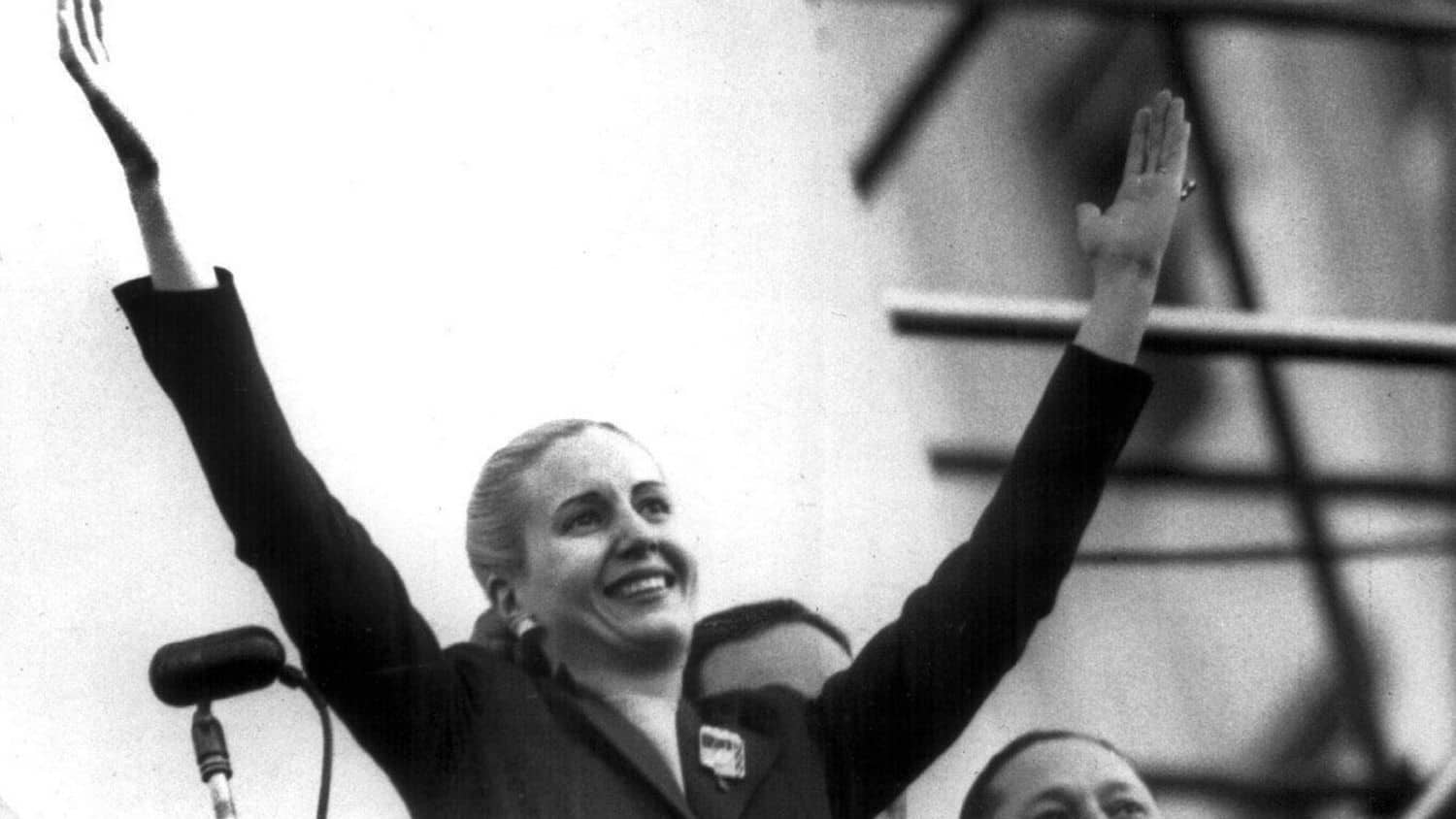 Whenever I am introduced to someone and they ask me “Where are you from?” and I respond that I was born in Argentina, one of the first things that springs out of their mouths is “Do you dance the tango?” to which I hate to reply, “Well, not really, but I can fake it quite well!” Cute answer which only reminds me of the shameful lapse in my education and national identity.

Then they go through their own personal knowledge of what or who else comes from Argentina, and the next question is usually regarding soccer legend Diego Maradona or star player Lionel Messi who they are familiar with if they’re fans of the sport.

Nobody is aware of our five Nobel Laureates – they’re not as colorful – and instead ask about our fame in the gastronomic department including that of our famous steaks which come from grass fed cows and are said to be superior to most in the world.

They do ask about our famous capital which can certainly not be forgotten by people who have visited Buenos Aires and is on the bucket list of so many people who would love to visit the country.

One name that never escapes their attention is Evita Peron’s which still holds the fascination of people far and wide who are familiar with her through not only the history of Argentina but because of Lloyd Weber’s immortalization of her name in the famous musical he wrote about her.

She died of cervical cancer in 1952. She was 33 years old. While I was quite young then, I remember her well.

“At 8:25PM, Eva Duarte de Peron, spiritual leader of our nation, has passed into immortality.”

Evita had died the night before, and I hadn’t even found out. I boarded the school bus as I straightened my tie with one hand and held on to my book bag with the other. A wisp of a girl, I was trying to get myself together in time to avoid being scolded by the bus monitor who was adamant about proper attire.

Like any other morning, I sat next to my friend who was quietly finishing her homework. When we arrived at school that morning there were teachers and other school personnel on the street frantically waving their arms in the air and instructing the drivers to take the children back home. The traffic was chaotic as everyone turned right back to leave the school in a hurry.

The news of Evita’s demise had not travelled fast enough to cancel school the next morning. School officials were afraid that her death would bring the political unrest that was brewing and was evident in the city. Children needed to be returned to their safe homes.

The ride back was somber, and we all felt impending danger although there was no visible sign of violence. But then, it was my first taste of how events unfold in my country. The most mysterious (and often gruesome) things can happen in a cloak of civility.

The exact time of her death was broadcast by radio for years after the event, and I believe that there is not one Argentinian alive who does not know that seemingly trivial detail. Every broadcasting station interrupted normal programming at that hour with the somber announcement.

In the weeks and months that followed, Argentinian schoolchildren in public schools wore black armbands on their white school uniforms and had to draw a black stripe on each one of the pages of their workbooks in her memory. At precisely 8:25 pm the country remembered, and it was paralyzed. Nobody could escape it.

Eva’s worst fear was being forgotten, but she should not have worried. President Peron summoned Dr. Ara, a Spanish pathologist, who was commissioned to preserve his wife’s lifeless body forever. After the funeral, the good doctor was able to continue perfecting his still life creation and it took two additional years to fine-tune his macabre work.

Evita was his masterpiece and there were malicious rumors that he had fallen deeply in love with her. He demanded to be left alone with Evita – his duties were performed in splendid isolation surrounded by strict security.

She lay in state at the Ministry of Labor while four soldiers guarded her coffin. My brother-in-law was doing his military service at the time and was one of them. The young men kept fainting and being replaced because of the intensity of the atmosphere and the strong smell of the funeral flowers, calla lilies and gardenias, which covered every inch of the room.

People were devastated by her death. They did not want to let go of everything that she had represented. There was the saintly Evita, sweet and pious who worked tirelessly for the poor and the destitute.

They remembered the glamorous Evita who blew into their lives like a cool breeze, wearing strapless silk gowns, mink wraps and sparkling jewels. She had a strong fascination with public life and almost became vice president, only prevented by her declining health.

Some viewed her as the earnest union leader who called herself a true “trabajadora,” worker for the people, and made heartfelt speeches wearing military tailored suits with broad shoulder pads counteracting her tiny waist and ethereal persona.

Then, of course, there was Evita the faithful wife, standing beside her man through thick and thin and the barren Evita, who was viewed as the mother of all Argentinian children. In their eyes, she was a saint, and many demanded that the Vatican acknowledge her and wanted above all else to have their own Santa Evita, which the Vatican declined.

She was not considered a saint by everyone. My family, like most Argentinians, was and is divided into the Peron admirers and the Peron haters. Peron was criticized in whispers and murmurs. People were in fear of the consequences of speaking their minds and my family was no exception.

I must confess that Evita captured my fantasies as well. I never tired of looking at the photographs in her book La Razon de Mi Vida, literally translated “My Mission in Life,” where she appears resplendent in sumptuous gowns and dazzling diamond jewelry.

I was eight at the time and would sneak into the library at home and sit occupying an eighth of my father’s Chesterfield chair with my spaghetti legs not yet long enough to reach the floor and furtively leafed through the book to find the photographs which showed her in her splendor.

I knew that my parents hated the Perons, and I rarely shared my incursions into her book with anyone but a friend who also found the pictures fascinating. Years later, sitting in a Broadway theater, I remember the murmur and my own goosebumps when Lloyd Webber’s Evita came out to greet her people from the balcony in the same white strapless dress captured in that book from so long ago. For me it was a heart stopping moment. I remember it so well.

Two years after her death, and in what were times of unrest and unhappiness in my country, my father decided to move our family to New York. It was while walking to school in Forest Hills that I heard that there had been a coup d’etat in Argentina and Peron was on his way to his first stop of exile in Panama.

He later traveled to Spain, a country which owed him much and whose own dictator granted him asylum. There he was visited daily by union leaders and politicians from Argentina eager to make nice with a man who could support their causes and help them to get elected back home with his endorsement.

Every president since then, including the present one, has called himself a “Peronista” in the hope of furthering their political careers. Peron’s power had not gone into exile with him.

During her husband’s exile, Evita’s beautiful corpse had no place to rest in Argentina. She was still such a strong symbol to so many people that she had to be banished and was taken to an undisclosed location in Italy and then transferred to many other mystery sites.

Her body had to be kept away from Argentina until she was returned to her homeland when her husband made a comeback and was given her rightful place in history. The folklore that surrounds the years the coffin was missing has filled many pages and imaginations.

In 1973, Peron was voted back into office with Isabel Martinez (his new wife) as his vice president, and she assumed his place as president when he died. The new first lady tried hard to emulate Evita, even in her appearance. But the nation could not be fooled. With her presidency a joke and the country in shambles, Isabel followed her husband’s footsteps and returned to Madrid and has not been a significant part of Argentinian politics since.

I recently visited Evita at Recoleta Cemetery, the Arlington of Argentina’s aristocracy. The cemetery is located in a very privileged neighborhood and houses a city of the dead within the bustling city of Buenos Aires where only the very rich and very powerful can bury their dead.

There are no ground burials there. The mausoleums resemble a very quiet city of elegant, if somewhat garish, structures where coffins are placed in marble slabs covered with fine old Belgian lace and can be seen through the glass or iron doors.

As soon as I entered the gates, the guard at the door pointed me and other visitors towards where he knew we wanted to go before we even asked. Evita’s mausoleum was overflowing with the fresh flowers that visitors leave daily. She was buried 20 feet underground to prevent anyone from taking her body.

Cameras clicked away as everyone posed next to her likeness in bronze to show the folks back home.

I could not help feeling sorry for Evita as I made my way out of the cemetery. A woman who prided herself to come from the people and worked for the people, a supporter of unions and the poor, now sleeps forever among the aristocracy who shunned her and whom she despised. I cannot imagine that she’s resting in peace, but she has definitely met her objective. She has not been forgotten.

I never had the nerve to ask my parents how her book made its way into their library. Could it be, perhaps, that I was not the only one in my family who was more than a little seduced by Evita’s beauty, power and charisma?

Are there any special women who changed your life? How did they do it? What were they like? What impression did they leave on you? How do you remember them today? What do you know about Evita Peron? Has her life affected yours in some way? Please share below!