Home Lifestyle The Bar Cart Dilemma: We Vowed Not To Shop At Walmart And... 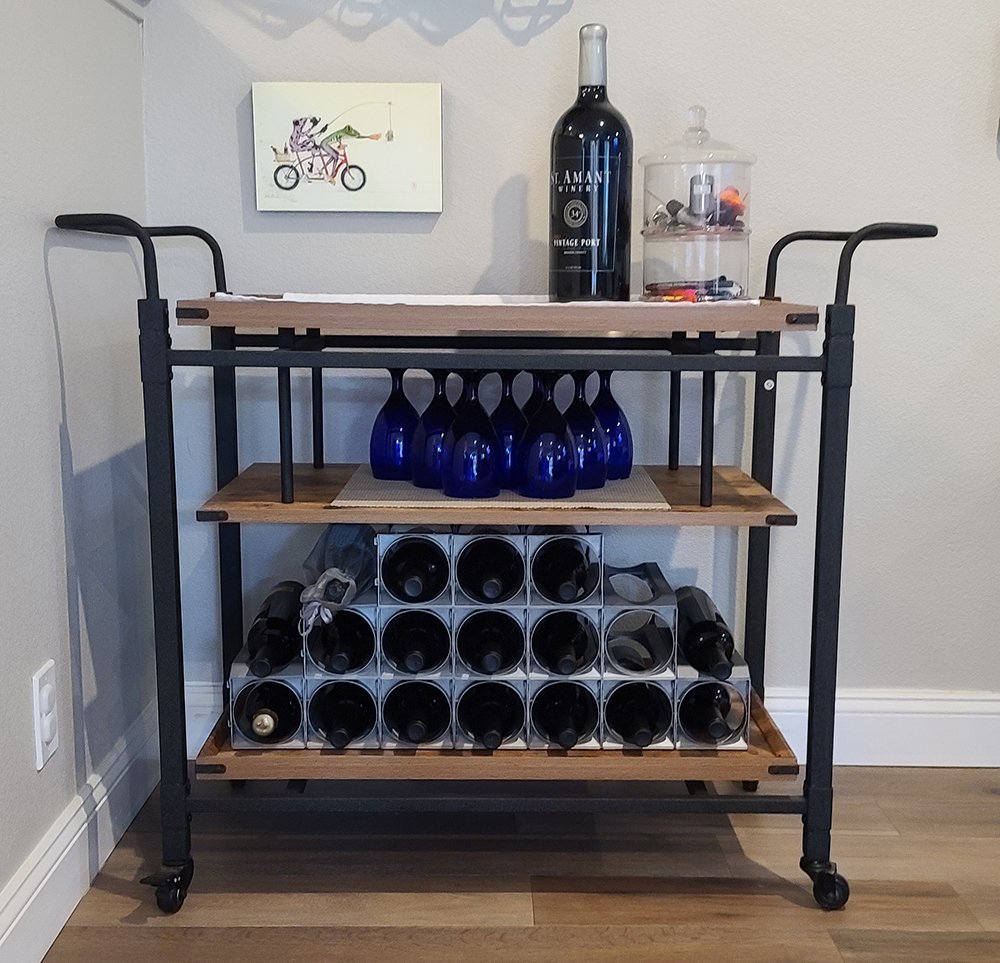 Mom would scary-mutter things about unfair labor practices and dismal manufacturing conditions whenever we drove past that store, her opinion proclaimed with such vehemence I could clearly imagine whip-wielding giants standing over kids (just like my friends and I) laboring over assembly of Barbie Dream Houses.  Walmart-avoidance was just a point of fact as I grew up, never something I judged in others. Or did I?

I probably could have been quieter about disliking Walmart when the Kids were young.  But like many Mom-isms, the words and explanations of why “We don’t shop at Walmart” shot out of my mouth. The Kids were listening.

“We don’t shop at Walmart” my four-year-old repeated to my Mother-in-Law once after receiving a gift in a Walmart bag.  That went poorly for me.

“Whatever do you do on Weekends?” My Daughter flabbergasted an entire dorm room of midwestern eighth graders during a People-to-People trip to Washington DC.  This after relating that she had never been to Walmart.  Third generation Walmart avoiders!  I was secretly proud.

It was a few days before Christmas, and we were about to host 18. For months I had been adding the finishing touches to our newly renovated house.  One project remained:  Finding the perfect Bar Cart for the empty nook off our Kitchen. A perfect place to stop and pour cocktails before rejoining the group in the open kitchen.  My quest to date unsuccessful, I knew what I wanted and couldn’t find it.

It was forty-eight hours before the onslaught of Christmas guests. Cookies were baking, wine was poured, and I was still without the Bar Cart.  The Kids were watching some iteration of Star Wars for the nine hundredth time as I read magazines.   I flipped open a BH&G and there it was:  The Perfect Bar Cart. My excitement was palpable; the dimensions were perfect.  Then I saw it…just below the picture tiny words “Exclusive at Walmart“.  Confident that I could find it somewhere else, I searched the internet.  Nothing.  My Daughter snapped a photo and used some magic App on her phone to help search.  Final result:   “Exclusive at Walmart“.

“UGH, I can’t do it” I sighed heavily and put the magazine aside.   I found myself peeking at the Ad.  Or could I? I thought.  My desires warred with my principles. I had failed so far in my quest for the perfect iron and wood wheeled Bar Cart.  Yes, I was desperate!

“Mom” my Daughter said, refilling her wine and listening to me sighing heavily, again.  “If it’s in stock just buy the damn thing.  Use it for Christmas and donate it if you can’t DEAL”.  It was in stock.

I immediately launched into buzzy stealth mode shopping: On my phone; Guest check out; everything in my Husband’s name.  I even lifted his credit card from his wallet.   Nothing to tie me or my name to Wally-World.  I got the ‘Ready’ text an hour later.  I held the car key in front of my Husband, who recruited our Son-in-Law to cruise the parking lot so he could run in and pick-up.  Ten minutes later a text from my Husband:

“They don’t have your Order”

My reply: “Are you at the right Store?”

“Checking with another person” His reply text.  20 minutes later a call from my Husband:

“OH, you put the order under MY NAME!”  Could I have forgotten to mention that?

The Bar Cart is perfect, the teasing about its origin unending.  The last words belong to Walmart.  Every few weeks I receive texts for special deals.  “Robert, Since you liked that you may like this…”.  Ugh, delete, block.  I.Don’t.Shop.at.Walmart.  Ever.  When I must, I send my Husband.

The Bar Cart Dilemma: We Vowed Not To Shop At Walmart And Then….. was last modified: August 29th, 2021 by Linda Vinopal