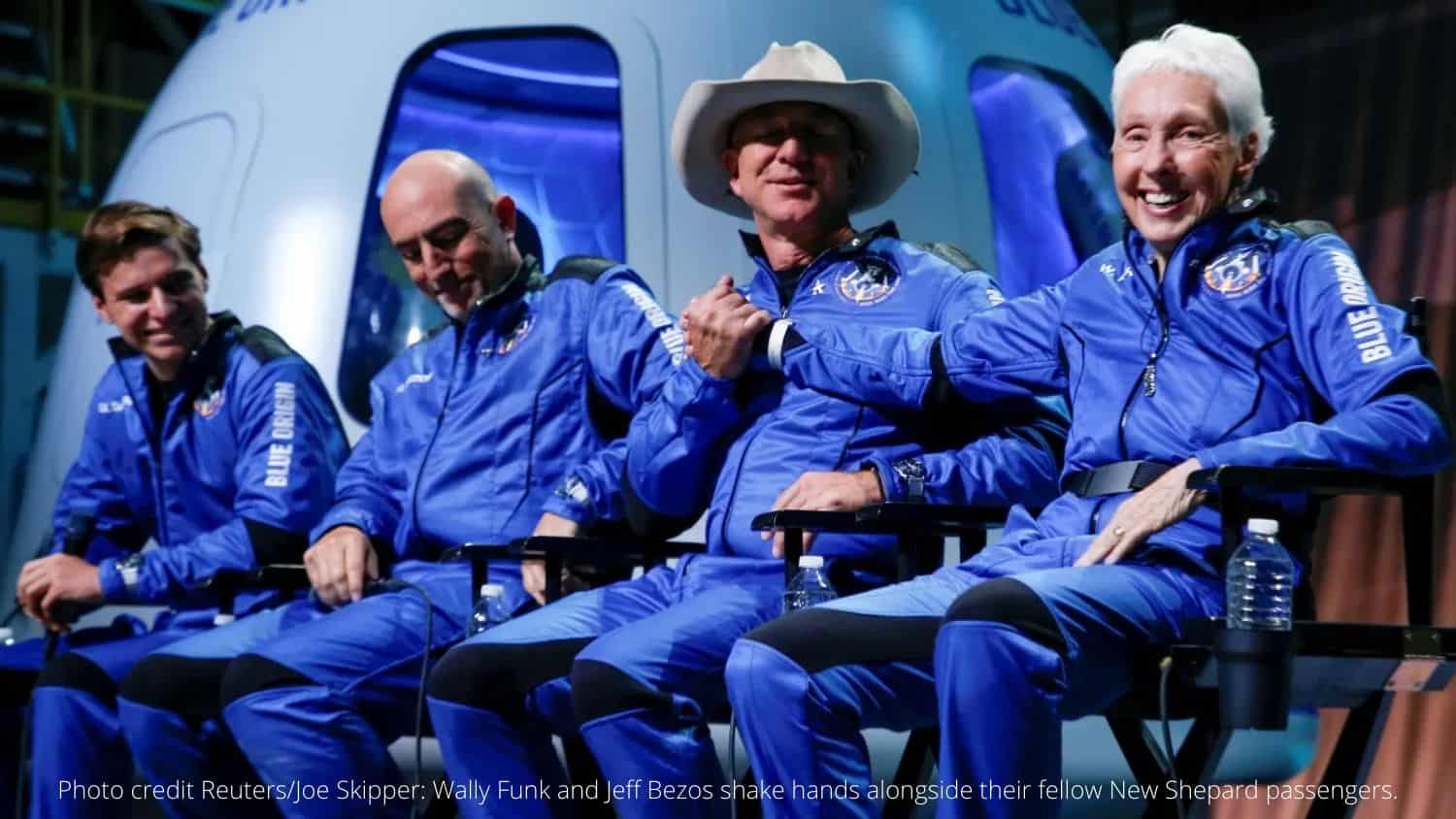 On July 20, 2021, Wally Funk became the oldest person to fly to space – 60 years after being denied that right because she was a woman. Finally realizing her dream at age 82, she is proof that it is never too late.

At a time when it was unheard of, Funk became the first female civilian flight instructor at a U.S. military base. Her goal was to become an astronaut, one of the first female astronauts. In 1961, she became the youngest Mercury 13 woman, undergoing testing that proved a woman could qualify for NASA’s corps of astronauts.

All of the women who passed the testing did better than their male counterparts. All of them had logged many flight hours, in many cases more than the men who were accepted in the program. Yet, until now, none of them had gone to space, blocked entirely because of their gender.

The U.S. government shut down the Women in Space program. The Soviet Union put a woman in space in 1963, but no American woman flew for NASA until 1983.

Wally was born in New Mexico, in 1939 and grew up in Taos where her parents owned a general store. Wally was always intrigued by planes, and when she was one year old her mother predicted she would fly.

She built model airplanes and began making planes from balsa wood. At age nine, she had her first flying lesson. Always a sportswoman, she enjoyed all sports and was an expert marksman, winning many shooting awards. She also was the top female skier in Slalom and Downhill in the US competition.

Funk graduated Oklahoma State University, drawn to it primarily for its famous “Flying Aggies” program, winning many awards and certifications while there. At 20, she became a professional aviator and an outstanding career in aviation followed, including winning many air races.

She has been chief pilot for five aviation schools across the country. To date, as a professional Flight Instructor, she has soloed more than 700 students and put through 3,000 Private, Commercial, Multi-engine, Seaplane, Glider, Instrument, CFI, Al, and Air Transport Pilots.

Two days ago, at age 82, she joined Amazon founder Jeff Bezos on his historic flight to the edge of space aboard a rocket and capsule developed by his private spaceflight company, Blue Origin. Launch time was 9:11 a.m. ET from a site in the Texas desert, the rocket travelling at three times the speed of sound.

At around an altitude of 250,000 feet, the capsule separated, taking Wally and the other passengers, including Bezos, to the edge of space, where the craft then descended under parachutes. Funk put another notch into her belt of record breakings and emerged with a big grin and arms opened wide, a look of pure elation.

Wally has an incredible can-do attitude and she never gave up on her dream to go to space. She applied to NASA four times over the years but was always rejected because she didn’t have an engineering degree – although John Glenn didn’t have one either.

So how did Wally finally get there? She purchased a ticket with Richard Branson’s Virgin Galactica flight for $200,000 but it was Jeff Bezos who finally got her there. Her joy and enthusiasm are through the roof! A lifelong dream fulfilled.

So, are you sitting in your home today reflecting on the business you never started, the novel you never wrote, the painting you never painted, the language you never learned, the trip you never took, the weight you never lost, the love you never found? Too old, you say? Wally Funk is 82 years old. Think about that!

Yes, as we age, we have to accept physical limitations, but don’t give up – modify! Let Wally Funk be your inspiration today. Paste her story into your journal. Hang her photo on your refrigerator. You are NOT too old, and you should NEVER give up.

What have you always wanted to do that you think you’re too old to accomplish? Why do you think age limits your ambitions and dreams? Do you think Wally Funk can inspire you to put an end to your limiting beliefs? Let’s have a conversation and be each other’s pillar and inspiration!